Going to the Dogs

Sometimes when I’m reading a lot of books in a row that deal with “weighty” topics, or require some intellectual heavy lifting, I turn to some lighter fare for a change of pace.  It is not unlike opening the window in the dead of winter to air out an over-heated and musty room, or to savor a spoonful of sorbet between courses rich in sauces and rich meats.  Well, for me, lately, this breath of fresh air has come in the series of books by Alexander McCall Smith–the series that started with 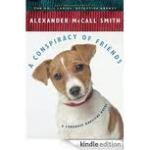 “Corduroy Mansions” –featuring a feisty little Pimlico terrier named Eddie de la Hay and a series of quirky characters who dwell in genteel poverty in a housing complex for which it is named.   Dipping into one of the books in this series (The Dog Who Came in from the Cold, A Conspiracy of Friends) is like putting on a comfy pair of slippers: the same characters  return in new situations, relationships develop and evolve, and the intrepid terrier is there to comment on all who surround him.  I love Smith’s gentle wit and wry humor, revealed through the philosophy expressed by the characters, in particular, the middle-aged wine merchant, William French.  Even the names of the characters brings a smile: Oedipus Snark, Terence Moongrove, etc.

I first discovered this series because the book’s cover had the picture of a charming little dog, one which looked like a Jack Russell Terrier (JRT).  So, judging a book by its cover, I took it home.  When I needed another dose of comfort, I bought the second in the series, “The Dog Who Came in from the Cold,” which featured our hero the terrier.  Now, a word about such dogs… I have a JRT and she has been the most challenging dog I have ever owned.  She is a runt, only nine pounds, but for all those nine pounds she is more like nine tons of trouble.

She has black “button eyes,”  velvet triangles of floppy ears, and a masterful head tilt, which will melt your heart, until you see just beyond her that she has torn apart the diningroom chair, or dug up a plant in the livingroom.  My husband shakes his head and laments, “The devil hath a pleasing face…” She refused to be housebroken for two years, she chases and threatens my mare (whom she distrusts for some reason), and is convinced that she rules the roost.  No measure of firm hand has dissuaded her.  And yet, this little devil is so devoted to me that she will not leave my side, she sleeps next to me in bed, and once, when I had to leave the country for a week, sat in the driveway for several days, refusing to come in and eat, awaiting my return.  You have to be a certain skewed type of individual to love these dogs!

Which brings me to my other dog series of books… Author Jon Katz, who has written a number of books on his dogs and his pioneering life on an old dairy farm in New England, struck a note with me when I happened upon his work.  I read the book he wrote about his beloved, troubled Border Collie in “A Good Dog” and have recommended it to many people since.  But be warned, it is a difficult story.  Katz has blended his tales of the healing of people (himself included) with the healing of animals, the healing power of animals, and the seemingly lost value of isolation, quiet, and  reflection,  which he found when moving to his farm.  I have read “A Dog Year,” “The Dogs of Bedlam Farm,” “Dog Days,” “Izzy and Lenore,” and “Rose in a Storm,” which is a fictionalized story of his dogs and perhaps the weakest book of those mentioned.   Although if you read more than one of his books they can become repetitive, as some of the stories and essays seem to overlap, but they are still by equal measure cathartic, and insightful, and real.  I enjoy his work and find his writing restful–like a good dog lying at your feet.  Here, a picture of my good dog, Lexi, in the snow.

Poppy – 28 YO Cotswolds based rider with a ceramic hip, dressage aspirations and a skewbald cob called Pea