A Visit to Shetland Without Leaving Home 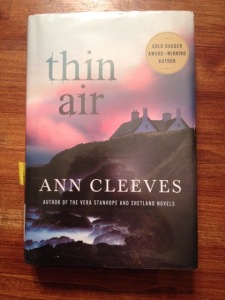 Award winning mystery writer Ann Cleeves creates a picturesque tour of the north Shetland islands in her book Thin Air, providing much atmosphere to the story of a ghostly little girl and a woman who goes missing. The plot centers around a group of “southerners” from London who arrive to celebrate the recent marriage of one of their university friends to a local fellow. The group of old friends are vastly diverse, ranging from an outgoing film producer to a neurotic, insecure librarian. Their first night on the island, Eleanor, a bold and sensual woman who is suffering from the recent loss of a baby, disappears and is later found dead along the water’s edge. Her death is complicated by the fact that she was researching the similar death of a 10-year old girl in 1930 whose ghostly sightings either presage pregnancy (or death). Hometown detective Jimmy Perez is brought on to the case along with lead investigator, Willow Reeves. This is problematic for those of us who have not read Ann Cleeves’ previous works featuring these characters, because she devotes a lot of attention to Perez’s grief over losing his lover and caring for her child. She also alludes to a budding attraction between Willow and Jimmy that never really gets off the ground. I found it hard to care about any of these characters and their internal sufferings since I did not know them well and felt all this background just dragged down the pace of the story. On the positive side, I enjoyed Cleeves’ descriptions of the countryside and the people, and found myself looking up a lot of words from the local lingo (peerie, hamefarin, and names of numerous shore birds). I liked the premise of the story–part historical ghost story, part murder mystery–but the plot did not deliver for me. After the first body is found (yes, there is always a second murder) the pace of the investigation was slow and wandered off course into the lives and angst of too many characters: all of the university chums, their spouses, some local innkeepers, parents of the home town boy and on and on. Some of these characters became significant to the story and some were perhaps included as red herrings, but on the whole it had the feel of a first draft in need of more stringent editing. A lot of the investigation was talking to people while other matters, such as the autopsy results, were brought up and then dropped. The ending (no spoilers) felt rushed and was merely dropped in the reader’s lap in the form of a big confession, tying up all the threads quickly with various explanations. It was too convenient, after dangling all these enticing tidbits and clues in front of the reader for over 300 slow pages. I understand Cleeves has an enormous following and that this was perhaps not the best book to start with, so I will have to give her mysteries another chance.

Poppy - 28 YO Cotswolds based rider with a ceramic hip, dressage aspirations and a 13 YO skewbald cob called Pea