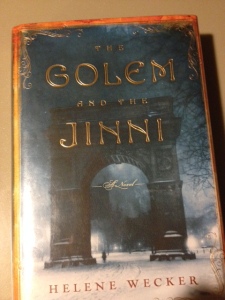 Just finished The Golem and the Jinni by Helene Wecker. Although you cannot fault her prose, I can’t help feeling as if the story would have been much better if it had been cut down by a hundred pages. The novel tracks the intersecting lives of two mythological creatures–the Golem of Hebrew lore and the Jinni from the Arabian tradition–but takes 484 pages to tell the story of these two main characters, their struggles, their saviors, their enemies, and friends along with the backstory of each and every one of these secondary characters. There is a lot going on here.  I felt as if the plot did not really get going until page 300 when a crisis erupts which sets everything spinning. What kept me hanging on through the story up until this point was the beauty of Wecker’s descriptions of turn of the century New York and the magical worlds she creates. Her descriptions employ all the senses so that a reader feels she has travelled the desserts with the caravans, meandered along the streets of The Bowry at night, and worked alongside the Golem, Chava, at the bakery. Unfortunately for this reader, I somehow felt let down at the end of this tome, as if the conclusion did not live up to the build-up of almost 500 pages. Still, I would read another of Wecker’s works.

Poppy - 28 YO Cotswolds based rider with a ceramic hip, dressage aspirations and a 13 YO skewbald cob called Pea